Sign up to the latest free online events to get insights and ideas to enrich your teaching.

You and your students can access a range of resources on 42nd Street and other musical theatre productions.

This production is part of the BroadwayHD collection, available to teachers exclusively on Digital Theatre+. Speak to a member of our team today to find out more and get access. 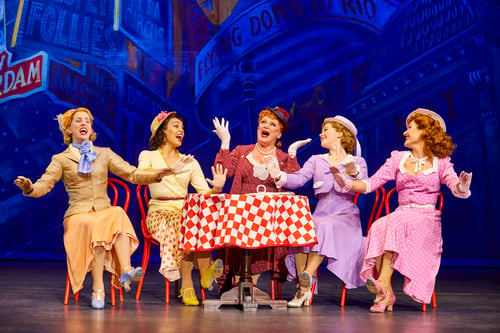 Based on the 1933 film, 42nd Street tells the story of Peggy Sawyer, who dances into the limelight when the leading lady of a Broadway musical is injured. This production was captured during its most recent West End run in 2018, with all-new choreography by Oliver Award-winning Randy Skinner.

Discover video and written resources to help you teach musical theatre and elevate your students’ knowledge, including worksheets, practical exercises and related productions.

Based on the life of Broadway star, film actress and comedienne Fanny Brice and her tempestuous relationship with Nick Arnstein, this production was captured by Digital Theatre live at Manchester’s Palace Theatre on the last night of its national tour.

Inspired by a true story, this musical follows the unlikely friendship between Charlie, who struggles to save his shoe business and Lola, an entertainer with a radical idea. Captured live at the Adelphi Theatre in 2018.

Access a range of exercises created to bring together techniques from the three areas of musical theatre – acting, singing and dancing – with this engaging handbook.

Providing teachers with an extensive variety of ready-made worksheets and quizzes, this guide will help enhance students’ knowledge of musical theatre.