Journey to Black Acting Methods: diversity in the classroom

Earlier this year, Sharrell Luckett, theatre practitioner, author, and teacher at the University of Cincinnati, convened a roundtable discussion over Zoom to mark the fifth anniversary of the publication of her book Black Acting Methods: Critical Approaches, which she co-edited with Tia M. Shaffer.

The book has transformed the theatre classroom for many teachers and students, and the event generated a fascinating discussion amongst its distinguished contributors about a Black aesthetic, discarding the Eurocentric model, the need to decenter whiteness, and many other significant topics.

We’re delighted to publish the recording of this discussion on Digital Theatre+ and to bring this collection of pre-eminent specialists to our subscribers looking to the future of theater.

As well as being the Director of the Helen Weinberger Center for Drama and Playwriting, Luckett is also the CEO of the Black Acting Methods Studio.

Pop Quiz! Can you name at least six acting teachers who developed their own approach or method to teaching acting? Yes? Okay, now reflect upon their racial and cultural lineage. What do these acting theorists look like?

If you were taught from white western models of theatre, meaning that the acting teachers that you are thinking about could be identified as white men and white women, except for Tadashi Suzuki, you’re not alone. In fact, prior to 2016, most of the acting methodologies that were discussed or taught in acting classrooms in the US and abroad were those developed by white people. But, not for me.

I’m a unicorn, of sorts. I was reared in Atlanta, GA, affectionately known as the “Black mecca,” and my first introduction to acting theory was through my culturally Black high school drama teacher, Freddie Hendricks. So, my orientation to approaching and teaching acting is through culturally Black sensibilities, like spirituality, improvisation, and community building.

I didn’t realize that the field of theatre was overly saturated with white thought — with little or no attention paid to Black contributions — until I went to college. Around this same time, I took note of most theatre textbooks acknowledging that theatre and performance began in Africa, but then jumping to Greece in just a few short sentences offering up no substantive excuse for why that was.

This realization sent me on a quest to uncover understudied knowledge from Black acting theorists and to re-imagine what a 21st-century approach to teaching acting could look like. Along the way, I stumbled upon a couple of things that blew my mind, and frankly, impassioned me with a need to help correct the historic record. For instance:

First, I figured I wasn’t alone. I knew there had to be like-minded theatre practitioners like me that were interested in bringing this knowledge to the forefront. I partnered with a former high school theatre friend, Dr. Tia M. Shaffer, who was also a high school drama teacher at the time, and we set out to enhance the landscape of actor training in the US by publishing a book. Little did we know that our edited collection would spark a long-reaching, global movement to diversify the way acting is taught. With a host of renowned “Black acting” theorists, we introduced the field of “Black acting methods” — rituals, processes, and techniques where Afrocentricity, Black thought, and culture inform how actors are trained.

Aptly titled, Black Acting Methods: Critical Approaches, our anthology went on to receive several honors and became a best-selling book in Theater on Amazon once the pandemics of racism and Covid-19 merged in 2020. Simply put, when theatre teachers began to collectively take seriously the business of diversifying their classroom materials, there was one contemporary book that spoke specifically to diverse, non-western acting methodologies. Now, theatre professors, high school drama teachers, and even middle school drama teachers are using Black Acting Methods: Critical Approaches in their classrooms and acting studios. In fact, the book is being taught across the globe in places like Spain, Australia, Uganda, and London.

To commemorate the impact of the book, in 2021, the Black Acting Methods Studio and the Helen Weinberger Center for Drama and Playwriting at the University of Cincinnati hosted a 5th Anniversary Roundtable celebration on Zoom. This event provided an opportunity for all chapter contributors in the book to come together and talk about how to teach the book, ways that the book influenced the landscape of theatre training, and what’s next for the future. Audience members from around the world were able to witness our first time gathering to ultimately mark our collective success. 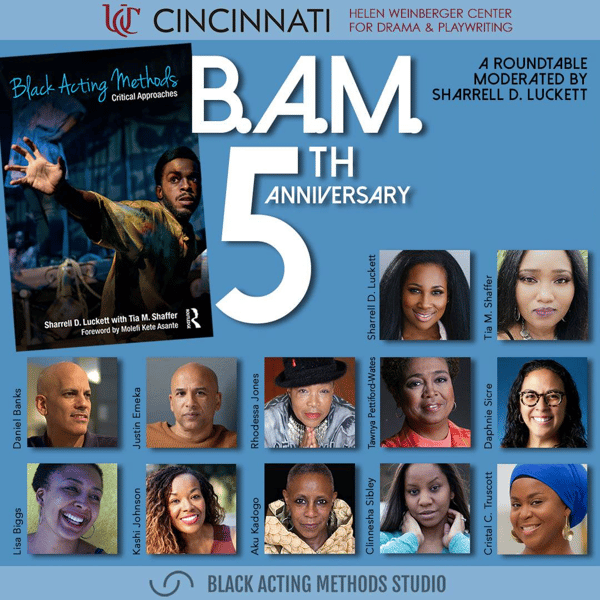 It was amazing and joyous and invaluable. So, what’s next? Well, that’s where you come in. Yes, you. We’re delighted to be able to share key excerpts from the Roundtable with you on Digital Theatre+. I hope that upon viewing this offering, you feel transformed with newfound knowledge on your anti-racist journeys — and you have new ideas for diversifying your theatre spaces and pedagogical resources.

As for the contributors, we’re off to complete the 2nd Edition of Black Acting Methods: Critical Approaches. This work just keeps getting bigger and bigger because of the potential of possibilities in building a new training ethos and landscape for the 21st-century actor.

To watch Black Acting Methods: Diversity in the Theatre Classroom, simply log in to your account on Digital Theatre+. Not yet a subscriber? Get in touch with a member of our team to unlock access.

Poetry in Action (in action!)

Picture the scene: in a freezing warehouse in north London, the intrepid Digital Theatre team are...

5 ways to level up your classroom group work

Do you think group work is a super valuable component of any successful classroom community? And...

Searching for some new teaching inspiration? In need of some ready-to-go practical activities to...