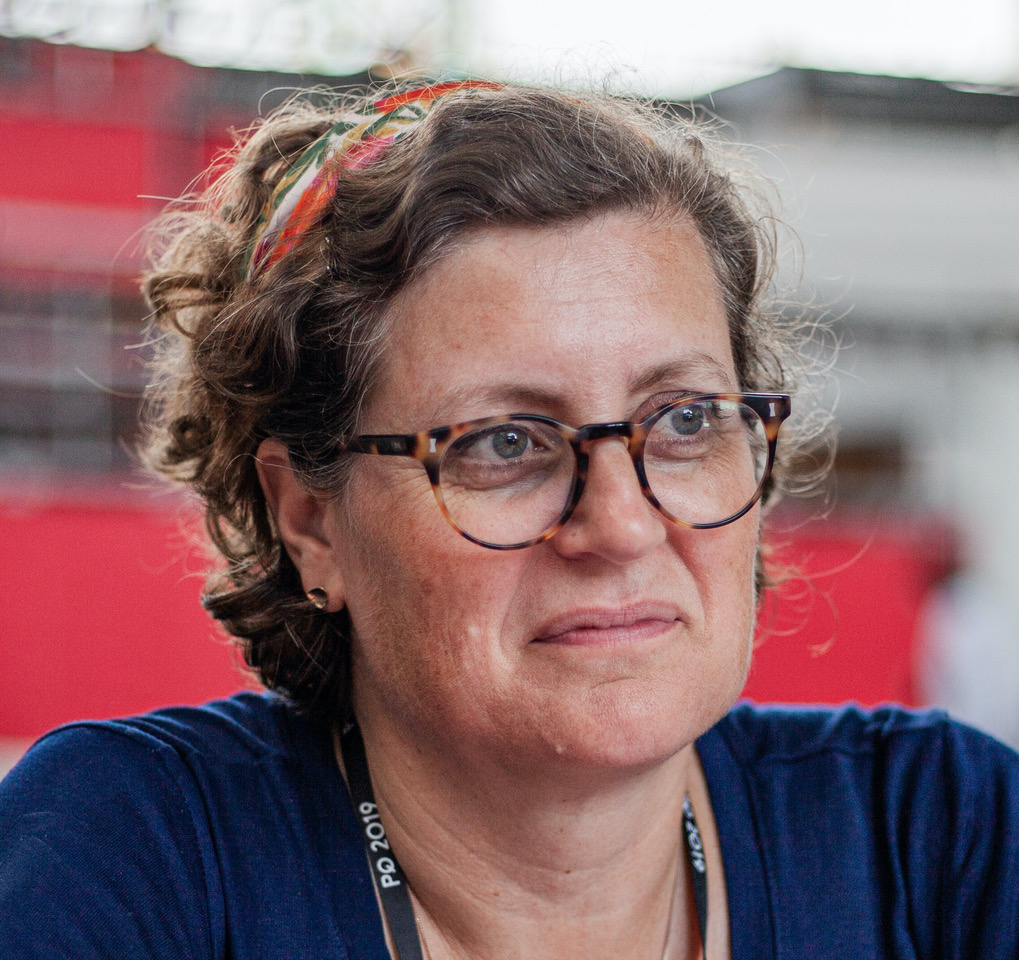 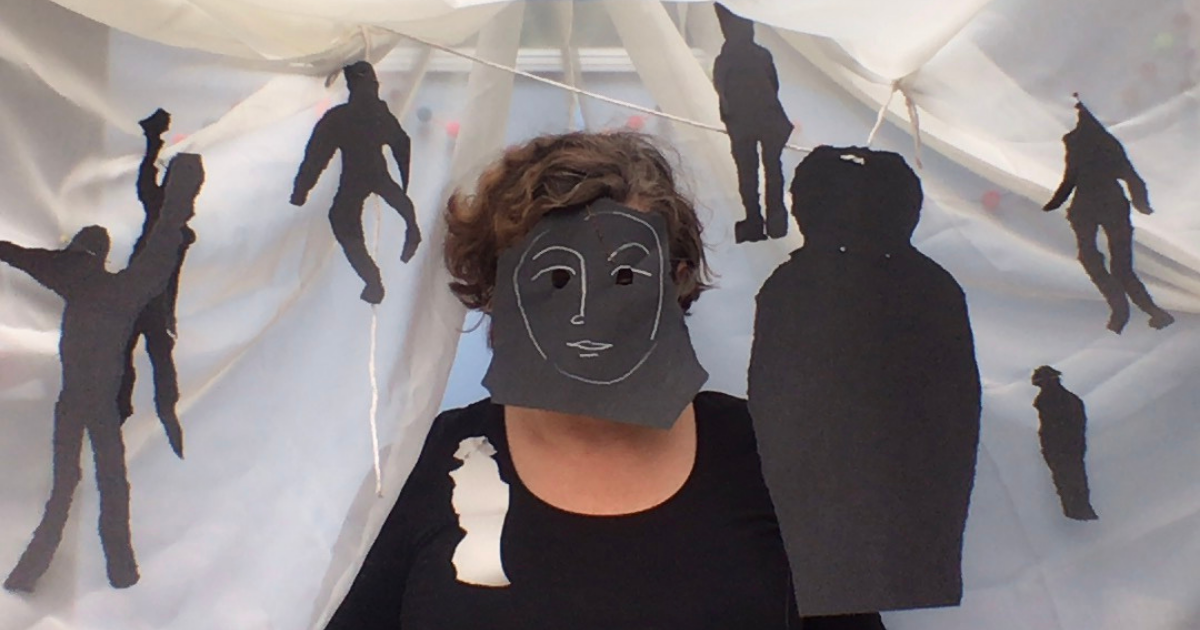 When everything went online in March 2020, students had to quickly move to producing work that could happen in their own rooms with limited materials, and which could be shared online. It was a drastic change, and there were some obvious areas which we expected would be difficult for theatre designers, such as not being able to create live performances in a real space.

There were, however, some less predictable elements that I noticed were missing from the learning of the students – messiness and playfulness. This article is about how I used my own experience as a practitioner in a pandemic to attempt to address this in an online workshop. 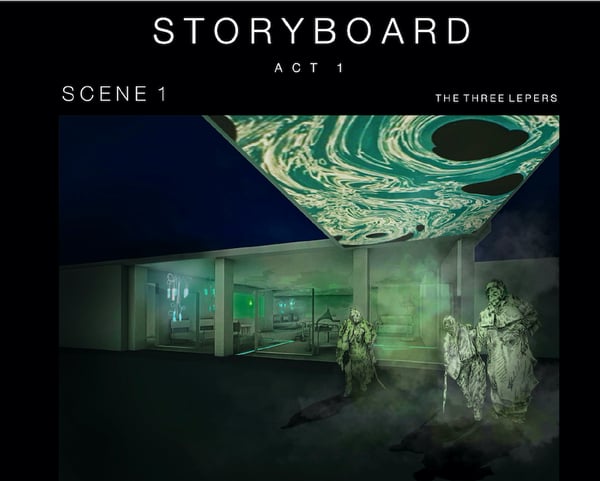 It has to be said that the students became very adept at this new way of working, making films or animations instead of live performances, CAD models instead of physical ones and PDFs instead of live presentations. They stepped up to the challenge and created some amazing work – their renderings were often very sleek, and they became really good at editing films and creating animations.

Everything was very efficient. Meetings online were focused and generally well attended (though I often found myself in the soul-destroying position of talking to a series of black squares on the screen and feeling I might as well have been talking to myself). All the tools the students needed were neatly contained in their laptops. They didn’t need to move from one spot to complete all their tasks and they did all their research online too.

But I felt something was missing. They were no longer having to learn how to deal with the ‘messiness’ of theatre design, and they didn’t have the opportunity for playfulness or accidental discoveries. Here are some examples of what I mean by this:

So I tried to find a way to bring it back in. To explain one way that I attempted to do this, I first need to talk about something that I was doing outside of teaching during our lockdowns.

In April 2020, I was supposed to be taking part in a short residency in Catalonia with three performers/choreographers, one fine artist and myself, a performance designer. When the pandemic hit, the residency could not go ahead, but we decided to try to be together on Zoom and set up a one-off meeting to see what would happen if we just played with whatever came to hand.

It turned into a weekly 2-hour session throughout all our lockdowns in the UK, and we ended up meeting nearly every Saturday for around 18 months. It is hard to explain what we did, but perhaps the best way to describe it is that we improvised together. Because we were in lockdown we had to use materials that were easily available, like newspaper, tape and bits of fabric. We would also try to find objects that we could all access. 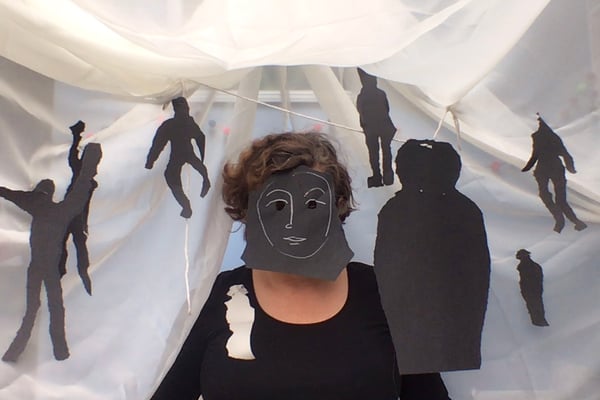 We explored ways of connecting by responding to or mirroring each other’s actions on the screen. We played with the spatial qualities of our own little Zoom box, how it framed us and how the scale changed as we moved inside it.

We found ways to break out of our boxes and to reach across to another’s space – such as in this picture where we used mirrors to bring another person’s face into our own box by capturing their reflection. 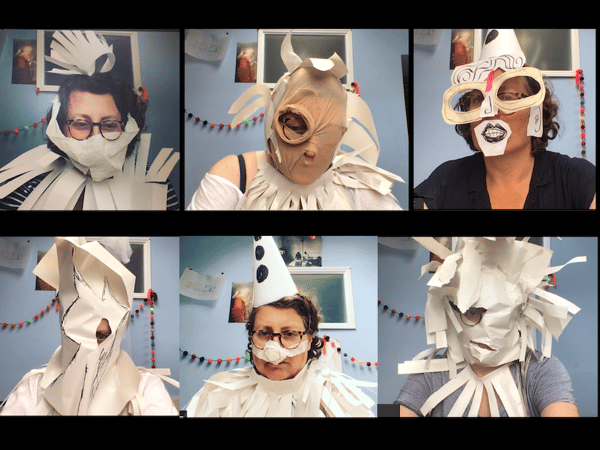 The fine artist and I started by drawing but soon ended up using simple puppets to echo movement, moving on to using our own bodies as a basis to create sculptures/costumes. In normal times I would have played with costume on other people, performers or dancers, and I found it really interesting to experience trying them on myself.

I decided to take inspiration from these improvisations and adapt one of my real-life workshops into an online version. The offline version is a costume workshop in which I put the students into small groups, get them to develop some simple movements, then create newspaper costumes for themselves that extend, impede or emphasise those movements. Finally, they show each other the movements in the costumes.

I tried to recreate the sense of playfulness of being together in a studio into the online workshop by getting the students to do some physical warmups to establish a sense of fun and of being in a safe space without judgement or self-censoring. I then put them into small groups and sent them into breakout rooms to develop some movement material together. The point of this part of the exercise is not to create amazing or complicated movements, but rather to have a simple movement sequence that they can all comfortably repeat. They are then asked to think about how costume can work with or against the movements, and to create costumes for themselves out of newspaper. I would periodically visit them in the rooms or bring them back into main space to show their progress, and eventually they came back together to show a final ‘performance’. 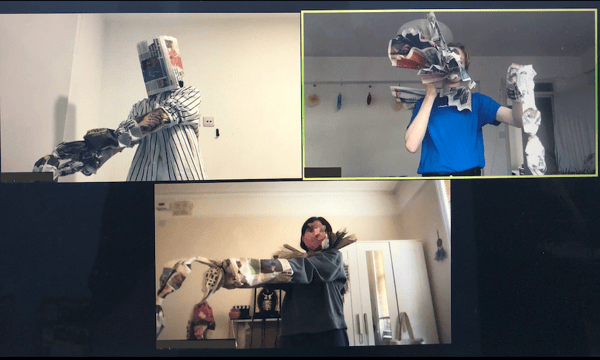 It was not the same as being in a room together, but it brought a level of fun and being able to make a mess – and actually, of being able to fail, which I think is really important when being creative. Perhaps there was also a sense of the informality which I often found hard to recreate in online sessions. Importantly, the students were able to use their own bodies to think through and try out costumes in movement, which was the aim of the workshop. They were also able to think about and explore the spatial qualities of the Zoom boxes we were in (the overall one that contained us all and the individual little boxes we sat inside), and how we were able to connect and create a ‘performance’ through simple movements and costumes. This is a transferrable skill into working as a theatre designer in real life.

It is true that the tendency to do a lot of the work on a computer was already there – it was just turbo-charged by the pandemic. But the experience of teaching entirely online has made me understand better the value of the less precise and more experiential elements of being a theatre designer. If we are to continue to teach remotely, I would make a plea that, as well as taking advantage of the efficiency of the digital online workspace, we also find more ways to recreate these messy and playful aspects of theatre design.

Reflections on the Music and Drama Education Expo 2021

Last week, we were delighted to attend the ninth annual Music and Drama Education Expo, held in the...

We were delighted to recently join forces with the Performance Design Educator’s Collective, the...